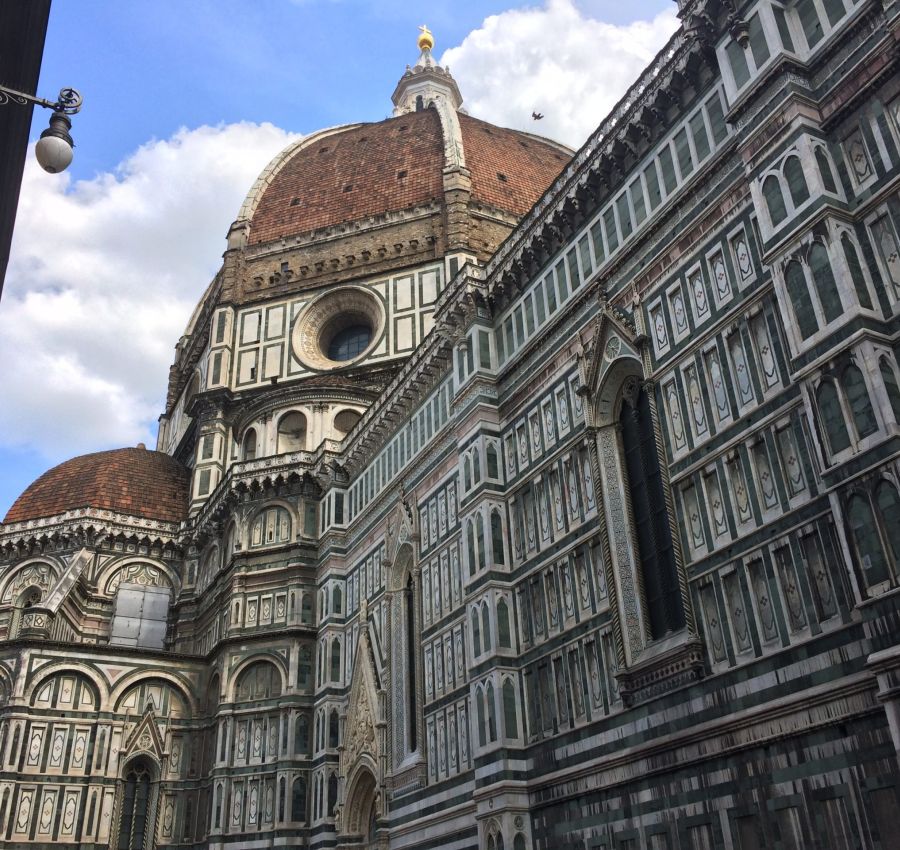 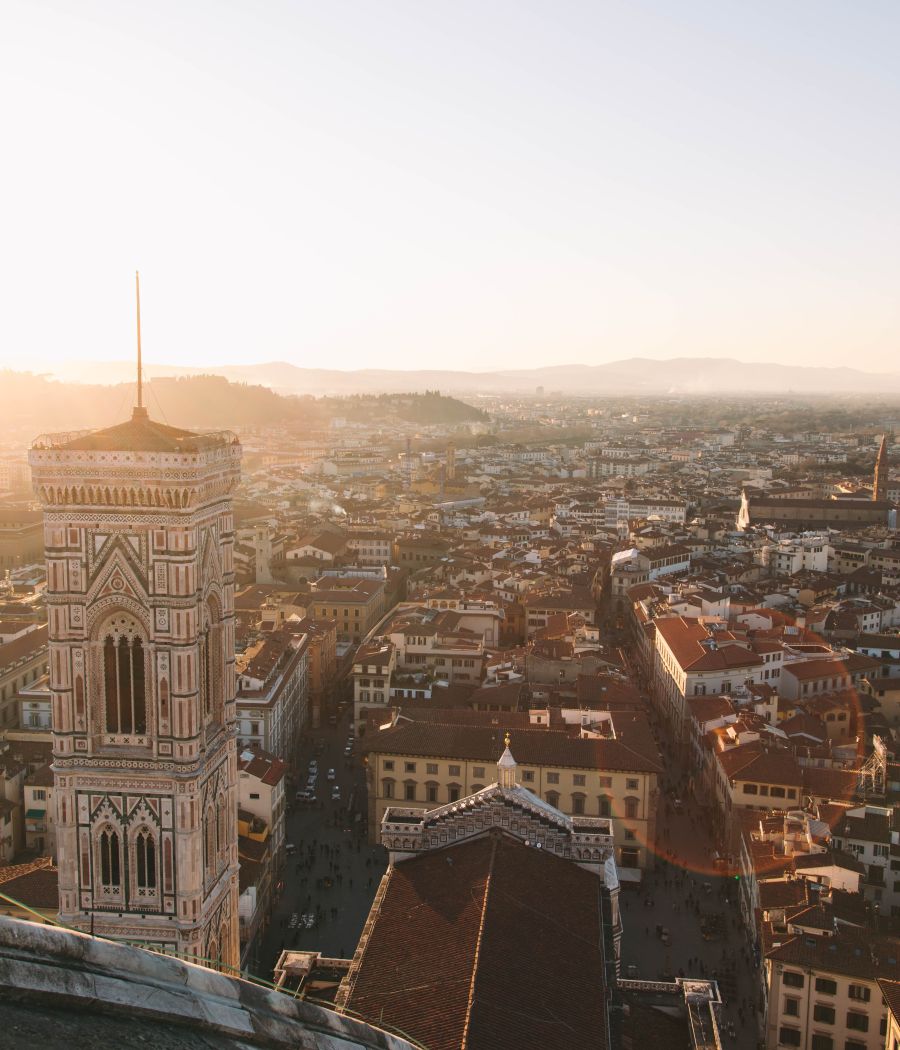 The dome of the cathedral, Brunelleschi’s dome, is visible from the panoramic terrace of Villa Tortorelli.

When Santa Maria del Fiore was completed, in the fifteenth century, it was the largest church in the world, while today it is considered the third in Europe after St. Peter’s in Rome and the Milan Cathedral. It stands on the foundations of the ancient cathedral of Florence, the church of Santa Reparata, in a point of the city that has hosted religious buildings since Roman times.

The construction of the Duomo, ordered by the Florentine Signoria, began in 1296 and ended from a structural point of view only in 1436. The initial works were entrusted to the architect Arnolfo di Cambio and then interrupted and resumed numerous times over the decades (by Giotto , Francesco Talenti and Giovanni di Lapo Ghini). After the completion of Brunelleschi’s dome, the consecration by Pope Eugene IV followed on 24 March 1436. The dedication to Santa Maria del Fiore took place during construction, in 1412.

The plan of the Duomo consists of a three-nave basilica body welded to an enormous triconca roundabout that supports the immense dome by Brunelleschi, the largest masonry dome ever built. Inside it is visible the largest surface ever decorated with frescoes: 3600 m², executed between 1572-1579 by Giorgio Vasari and Federico Zuccari. At the base of the marble lantern, there is a panoramic terrace overlooking the city located 91 meters above the ground. The facade of the Cathedral in polychrome marble is from the modern era, dates back to 1887 by Emilio de Fabris and is an important example of neo-Gothic style in Italy.

It is the cathedral of the Archdiocese of Florence and can hold up to thirty thousand people. It has the dignity of a minor basilica.

Near the cathedral there is Giotto’s bell tower, the bell tower of Santa Maria del Fiore, the cathedral of Florence. The height of the bell tower that can be visited to the public is 82 meters and the number of original steps to climb to the top is 398 to which 15 must be added which are part of the first access ramp.

Piazza (square) Massimo d’Azeglio is a large rectangular and tree-lined square in the historic center of Florence. Not far from the viali di Circonvallazione, numerous streets lead into it: via Alfieri, via Farini, via Giusti, via della Colonna, via Carducci, via Niccolini, via Giordani and via Silvio Pellico. The structure “Villa Tortorelli” is located right inside this square full of greenery, tree-lined and with several historic buildings. The square, which still maintains its residential and upper middle class character, is located immediately within the restricted traffic area of ​​the center of Florence and is crossed by various urban transport lines; it has a rectangular perimeter and its layout is based on a series of paths and flowerbeds originally lawned with tall trees, mainly plane trees and hackberry trees. Currently the square houses a small playground and a soccer field limited by a high fence. Next to the tub there is now a carousel for children and a small building housing a public bathroom. On the side of the park, shortly before Florence became the capital of Italy, a theater was built dedicated to Umberto I. The construction mostly in wood, with a circular plan, was destroyed by a fire in 1889 and never rebuilt, replaced from the Uzielli palace, entrance of the exclusive Villa Tortorelli. 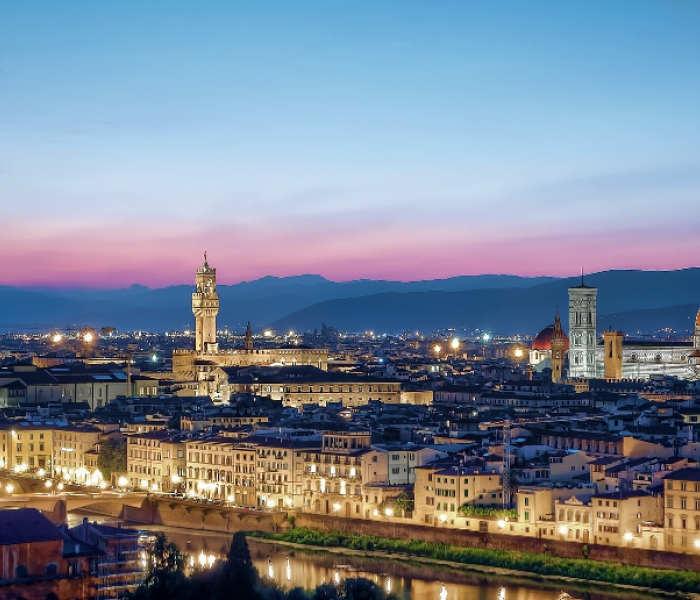 This Florentine piazza was designed by architect Giuseppe Poggi and built in 1869 on a hill just south of the historic center, during the redevelopment of Oltrarno, the left (South) bank of the Arno river. In 1869, Florence was the capital of Italy and the whole city was involved in an urban renewal, the so-called “Risanamento” or the “Renovation” of the city’s neighborhoods. Lungarni (riverside walkways; “lungarno”, singular) were built on the riversides. On the right bank, the fourteenth-century city walls were removed and turned into the Viali di Circonvallazione, mimicking the French “boulevard” design, six lanes wide and lined with trees. On the left bank winding up the hill of San Miniato the Viale dei Colli was built, a tree-lined street over 8 kilometers long ending at the Piazzale Michelangelo which was built as a terrace with a panoramic view of the city.

The square, dedicated to the Renaissance sculptor Michelangelo, has bronze copies of some of his marble works found elsewhere in Florence: the David and the four allegories of the Medici Chapel of San Lorenzo. The monument was brought up by nine pairs of oxen on 25 June 1873.

Poggi designed the loggia in the neoclassical-style that dominates the whole terrace, which today houses a restaurant. Originally it was intended to house a museum of works by Michelangelo, never realized. In the wall of the balcony, under the loggia, there is an epigraph in capital letters referring to his work: Poggi turned this into his monument in 1911.

The view captures the heart of Florence from Forte Belvedere to Santa Croce, across the lungarni and the bridges crossing the Arno, including the Ponte Vecchio, the Duomo, Palazzo Vecchio, the Bargello and the octagonal bell tower of the Badia Fiorentina. Beyond the city are the hills of Settignano and Fiesole. 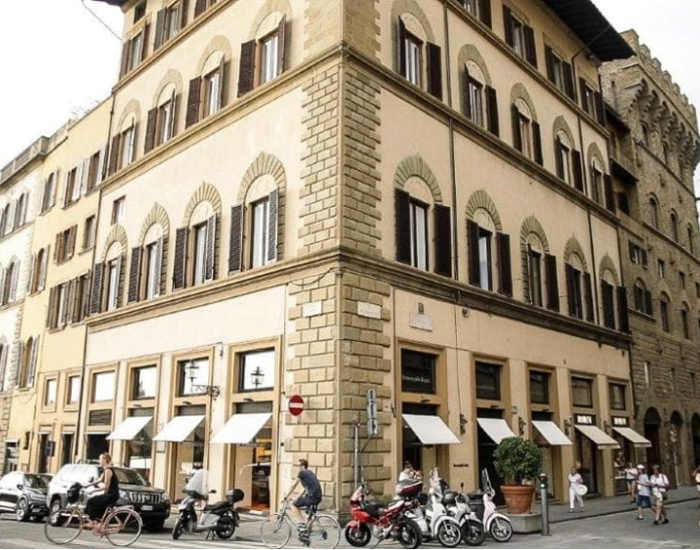 Via de ‘Tornabuoni, or Via Tornabuoni, is a luxurious street in the historic center of Florence that runs from Piazza Antinori to the Santa Trinita bridge, crossing Piazza Santa Trinita.

It is one of the most elegant streets in Florence since the Renaissance when it underwent a process of profound transformation with the construction of numerous noble palaces that occupy both street fronts. Today it is characterized by the presence of the best high fashion designer boutiques such as Gucci, Salvatore Ferragamo, Enrico Coveri, Roberto Cavalli, Emilio Pucci and others; and jewelry such as Damiani, Bulgari and Buccellati. 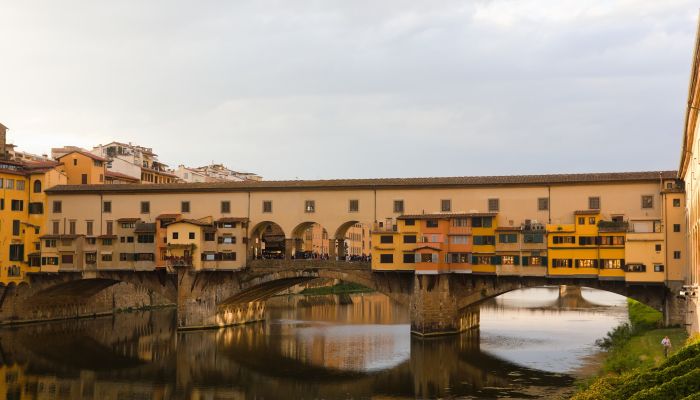 Located 19 minutes walk (1.4 km) from Villa Tortorelli, or 20 minutes using bus 23 from the Colonna Liceo Michelangelo stop (4 minutes walk from Villa Tortorelli), the Ponte Vecchio is one of the symbols of the city of Florence. one of the most famous bridges in the world. It crosses the Arno river about 150 meters downstream of the area where the river naturally presents one of the points where the riverbed is narrowest within the city of Florence in its stretch upstream of the Cascine. 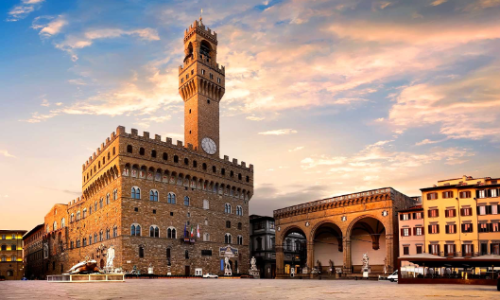 Piazza della Signoria is the central square of Florence, the seat of civil power and the heart of the city’s social life. L-shaped, it is located in the central part of medieval Florence, south of the cathedral of Santa Maria del Fiore. In the past it has taken on various names, such as piazza dei Priori or piazza del Granduca. 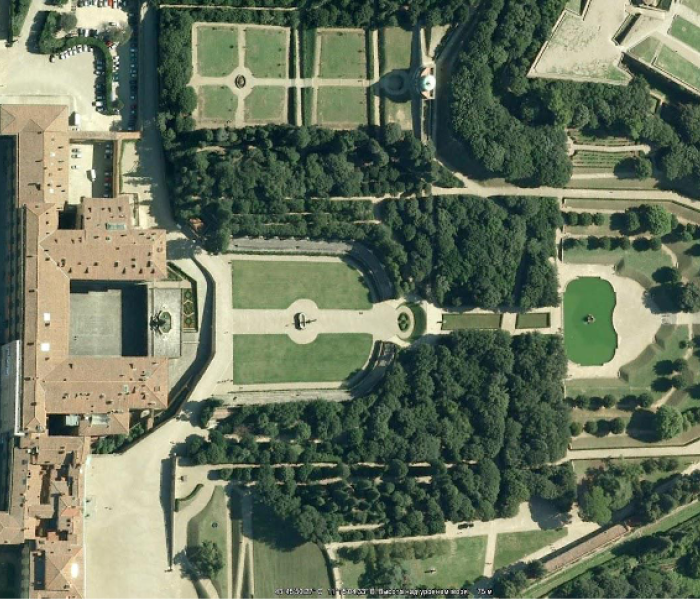 The Boboli Gardens are ancient gardens in Florence where you can spend an afternoon outdoors in absolute peace and total privacy.

The Boboli Gardens is a historic park in the city of Florence. Born as the Grand Ducal garden of Palazzo Pitti, it is also connected to the Forte di Belvedere, a military outpost for the safety of the sovereign and his family. The garden, which welcomes over 800,000 visitors every year, is one of the most important examples of an Italian garden in the world and is a real open-air museum, for its architectural-landscape setting and for the collection of ranging from Roman antiquities to the twentieth century. The Boboli Gardens is one of the most famous gardens on the peninsula. 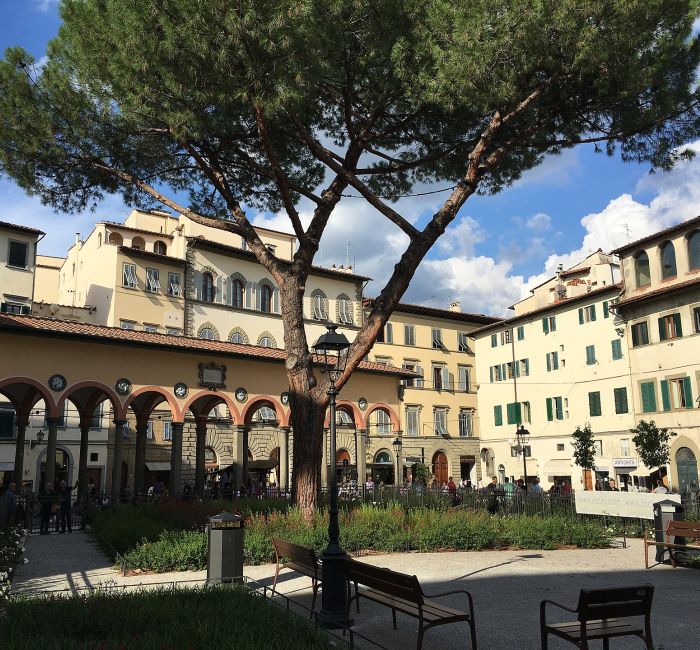 Just 6 minutes from Villa Tortorelli, Piazza dei Ciompi is a square in the historic center of Florence, in an area about 300 meters north of the Basilica of Santa Croce. The square is accessed from via Pietrapiana, Borgo Allegri, via Michelangelo Buonarroti and via Martiri del Popolo.

In the same period, a fixed flea market was also created, housed in the stalls in the center of the square, built as small rooms covered by a canopy. Many of the shops on either side of the square are also dedicated to antiques and bric-à-brac. This corner of Florence, although decayed over the years, still retains an authentic local flavor. We advise you to take a trip to see nice antiques and particular objects that you can take home in memory of Florence 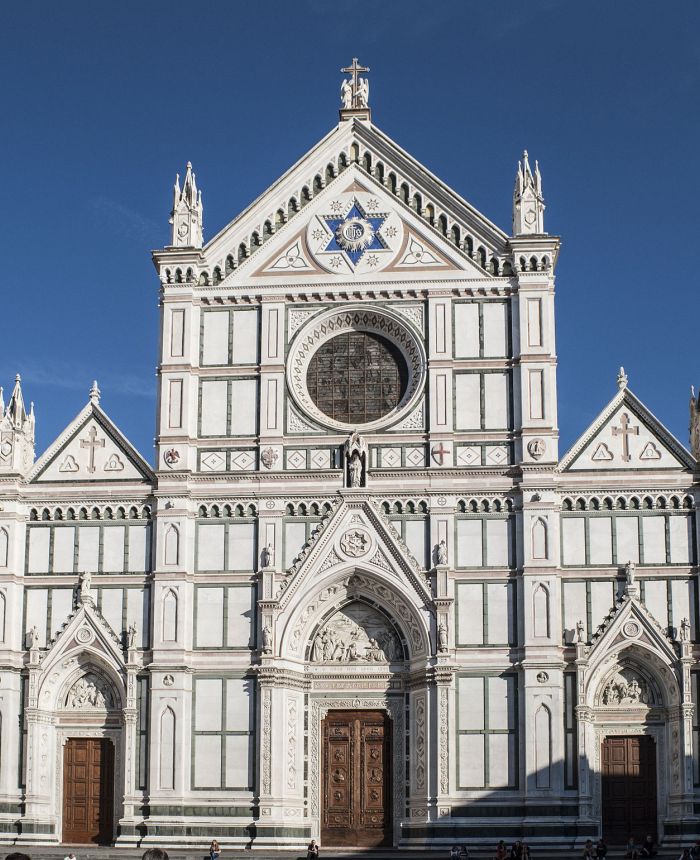 Just 8 minutes walk from Villa Tortorelli, the Basilica of Santa Croce is the second largest religious building in Florence, after the Duomo, with its 115 meters in length and 38 meters in width.
Construction of the basilica began in 1294, on the foundations of a small chapel, built to commemorate the death of St. Francis of Assisi. Once the construction of the Church of Santa Croce was completed, the banner of the Dominicans, or the Basilica of Santa Maria Novella, took a back seat.

Although the interior of the Basilica of Santa Croce is not as spectacular as that of Santa Maria Novella (with exposed beams), the sculptures and paintings that decorate its walls have enormous artistic value. In the chapels you can see the frescoes of the great masters of the History of Art, such as Giotto, Brunelleschi and Donatello.

The Piazza di Santa Croce, where the church of the same name is located, is one of the most vital areas of the Tuscan capital. Street artists show their work here on a daily basis and, throughout the year, the Municipality organizes various activities in this square. 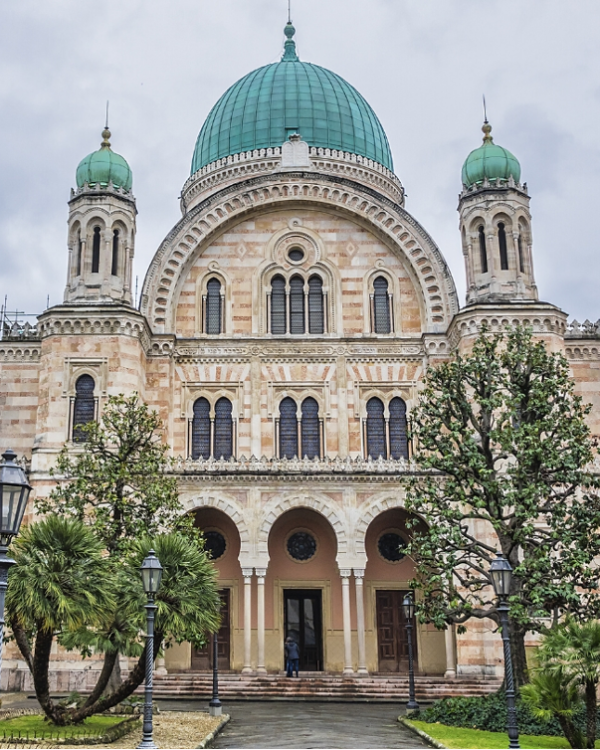 Florence’ synagogue and the Jewish Museum

The main synagogue of Florence or the Jewish major temple is located in the historic center of Florence in via Farini. Its copper-green dome is a famous point of the city panorama. The synagogue of Florence was inaugurated in 1882. In 1868, David Levi, president of the Israelite University of Florence, with his testamentary bequest, allocated his assets to the construction of a new Florentine synagogue and a place of Jewish worship “worthy of the city”. It began with the purchase of land near the new Mattonaia district and Piazza d’Azeglio and thus the major Israelite Temple was built. The first stone, sent from Jerusalem, was placed on June 30, 1874 and the inauguration took place on October 24, 1882 The building is clad in travertine (white) and pink pomato, is in Moorish style with a central plan with a median dome and towers side with domes on the facade. It is one of the synagogues known as “emancipation”. The synagogues of this season were therefore generally designed as independent constructions and not hidden in residential buildings, as was the case in ghettos.

The history of the Florentine community can be traced in the museum on the first floor, founded in 1981 and expanded in 2007 and distributed over two floors: the first floor concentrates on the historical events of the Florentine community and on the Torah and its ornaments, in which the most important and precious, ranging from the late sixteenth to the nineteenth century, most of the seventeenth and eighteenth centuries; the second floor, on the other hand, is mainly dedicated to the ceremonial objects of some holidays and to others in use at different moments in Jewish life. The second floor ends with the Sala della Memoria, dedicated to the events of the Shoah.